On June 11, 2014 the 14th Kunzig Shamar Rinpoche died suddenly in Germany at the age of 62. He had just completed several days of teachings at his main European seat in Renchen-Ulm, Germany.
At approximately 7:30 am (Central European Time), he experienced a heart attack. Emergency medical services were immediately summoned but nothing could be done. Rinpoche is now in the meditative Thugdam state.
Shamar Rinpoche’s unexpected death leaves thousands of his disciples in Asia and the Western world greatly saddened and in a profound state of shock. He touched the lives of countless numbers of people. His accomplishments as a spiritual leader will benefit sentient beings for years to come.
His funeral will take place in Asia. Details will be announced shortly.

We are deeply grateful to Kunzig Shamar Rinpoche for his great support for developing Karmapa´s Healthcare Project over the last years.
In 2007 Shamar Rinpoche encourage us to found and establish the annual KHCP-medical camp at the Kagyu Monlam in Bodh Gaya.

We wish very much for his return to have him back for all of us.

Pia, Peter and the KHCP-team. 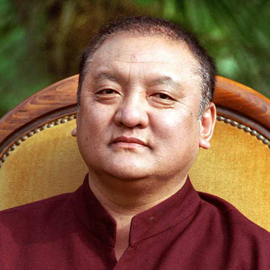 Addendum:
June 19th, 2014 – Renchen-Ulm/Germany
His Holiness the 17th Karmapa Trinley Thaye Dorje along with Karma Kagyu Rinpoches, lamas, monks and nuns and lay practitioners performed a traditional Buddhist ceremony today. After the ceremony, Rinpoche´s body was escorted out of the funeral home. Several dignitaries including His Excellency the Ambassador of Bhutan to the UN in Geneve, Mr. Daw Penjo and hundreds of devotees attended the ceremony, wanting to pay their last homage to Rinpoche. Shamar Rinpoche’s body, accompanied by His Holiness Karmapa will travel New Delhi and forward.

KHCP organized the emergency medical service during this days. We hereby thank all our volunteer doctors for their great support.

Announcement for cremation of Shamar Rinpoche in Kathmandu/Nepal:
Please forward to your friends!
In coordination with Jigme Rinpoche the KHCP is now preparing a great medical camp during the cremation ceremony of Shamar Rinpoche in Kathmandu (last 2 weeks in July).
Doctors, nurses, security men and any kind of volunteers are welcome to contact us.
We are expecting more than 50.000 people. Donations to buy the requiered medicine are welcome.
Thank you for your support.

++ Medical Camp during the cremation of Shamar Rinpoche ++


On July 1, 2014 His Holiness Karmapa Thaye Dorje arrived at Shri Diwakar Vihara Buddhist Research and Educational Institute in Kalimpong/India along with the kudung of Shamar Rinpoche


July 22-29, 2014 Shamar Rinpoche´s kudung in Buthan
Members of the royal family of Bhutan visited the kudung of Kunzig Shamar Rinpoche and met with H.H. Gyalwa Karmapa and Jamgon Kongtrul Rinpoche